Realm Works, Hero Labs and why i no longer use books at the table.

So my physical crafting has slowed down immensely since the completion of the Tomb of Horrors. There's a few reasons why but largely i really don't have a need for more terrain right now. I DM for two groups. One has just left the ToH while the other still has one more session left.

However, my primary group really threw me into an area I am inexperienced as a DM. The open world... They wished themselves back up to the surface which effectively stopped my ability to rail-road them into a story line as they progress through the Underdark.

I started researching options. The concept of released modules was very appealing due to the reduction in necessary prep time. The problem however is I'm a very process driven individual, i like order in my information so the concept of using modules has always been irritating as I was always flicking through the books trying to find relevant information. I found the books broke the immersion for me and our group. So I started researching more advanced ways to manage the stories and modules.

A few things happened around this time which have completely changed the way I both prep and run games. And the changes have certainly been for the better.

A) Hero Labs released the monsters for the 5e SRD pack.
B) I brushed off my copy of Realm Works to test the functionality between HLs and RWs.

Hero Labs is a simple concept that most players would recognize. It's a character generator that lets you build all sorts of fun and funky characters. Enter it in the app, print it off or run it on a laptop / Apple IPad.

As a DM I honestly only purchased Hero Labs because I wanted a way to let new players create characters that interested them quickly and efficiently with minimum reading. You simply can't hand the PHB to a non-gamer and expect them to keep up. I wanted to use Hero Labs to avoid that learning curve and get them straight to the table; and it certainly worked.

But as a DM I thought that's all I was doing. I really didn't understand what Hero Labs could do for me beyond that. I could see options for the Encounter Builder and Tactical Console in the menu but the 5e SRD release from Lone Wolf didn't have monster's loaded at that time so these didn't really do anything for me.

Then Lone Wolf release the monster update and I began to get excited. Opening the Encounter Builder I was presented with a screen that allowed me to quickly pick monsters to add to the encounter.

Note: The Hero Labs 5e Community Pack has added all of the monsters missing from the initial SRD release. Check it out HERE. 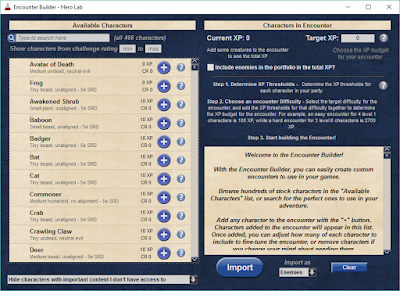 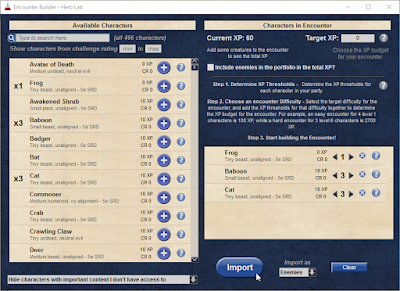 Of course I then ran straight to the Tactical Console to test out that functionality. I was presented with a page that displayed almost everything I could want in a combat. It rolls and then tracks initiative. I can apply damage to heroes and monsters. I can heal heroes and monsters. I can mouse over anyone to see what stats / abilities they have. 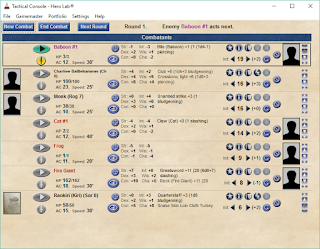 At this stage I was over the moon. I had all the monsters from the PHB at my disposal to throw quickly and efficiently at my players and I no longer needed a spreadsheet to track damage against the monsters.

I did however find myself getting tired of having to enter monsters into Hero Labs Editor every time I wanted to do something that was different from the stat block that comes with the MM. That concern however was completely blown away when Lone Wolf released the latest patch for the 5e SRD giving us access to a Custom Monster feature within Hero Labs! Now we can create custom monsters and npcs in the time it takes to cut and paste the details across! 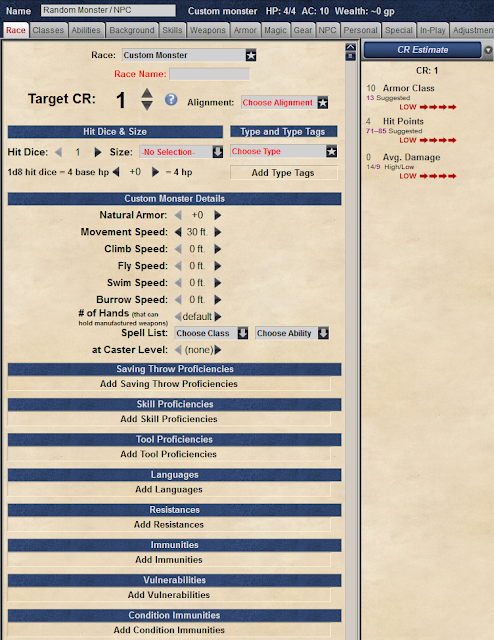 I was very happy with Hero Labs at this stage. It was already changing the way I managed combat at the table. It was enabling me to react quicker to the players. If they wanted to know how a spell or special ability worked, i could simply hover over the entry and read the text. I found myself getting more descriptive. Instead of saying you cast X spell. I can however over the spell, see what component it requires and how it should be cast and build that into the description.

Hero Labs isn't the first Lone Wolf software I purchased however. About a year ago I purchased a copy of Realm Works to help manage my campaigns. Realm Works is a campaign management tool. It's where you keep track of npcs, towns, stories, etc.

I tried to use it for a bit, but honestly I did not understand just how useful and amazing that tool was. I can honestly say I think I was overwhelmed. There were so many things with the tool that you could do; and I wanted to enter it all. I found myself entering data for completely unnecessary items. Building every npc in an inn because i could and then looking at the clock and realizing I had run out of time to organize the actual encounter that my player's we're turning up to run.

So I stopped using Realm Works and moved to One Note for the best bit of a year.

I am so glad that I decided to return to Realm Works!

The first time I used it I started by adding in the places, npcs and storyline elements into the tool. Because of this I really didn't see the value as I was just taking notes.

If you are looking at Realm Works you need to stop and enter your core books!

The reason for this is simple. Realm Works most powerful feature is 'auto-linking'. If you write a note that contains the name of another piece of content within the tool it will automatically create a link to that content when you save the note.

This is why you need to enter the core books first. You create the PHB with a spell content called 'Spell of Plants'. Now every-time you write 'Spell of Plants' in a snippet within the tool a link is generated allowing you to follow the link through to the entry about the spell.

Here you can see the Speak with Plants entry. 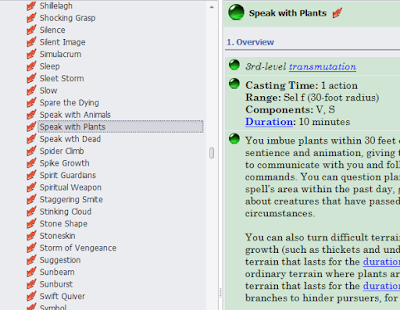 Here I typed the name of the spell in a note. When saved it automatically created a link to the spell.

Now this become's immensely useful because i now have links to all the relevant rules from directly within my notes. This is saving me a huge amount of time as i no longer need to look up the option in the rule books.

Of course this functionality works on module content too! The trick with modules is to start with the back. Enter everything from the appendixes. Then enter just the names from the rest of the module. With the names of all the entries entered you can start copying / entering the actual text from all the entries in. Every time you save a link will be created to everything it recognizes.

Here you can see an entry from Princes of the Apocalypse. It's picked up links to numerous articles.

Note the colors here. You can mark snippets as Read Aloud passages or a variety of other alternatives. This colors the snippet of text enabling you to identify it much quicker at the table!

By now you should start to see there are benefits to putting your books aside and reading the module on a laptop. Jumping around within the text to the relevant information becomes simple and efficient.

Of course however there is more!

There is a much better function though. There's a button to load the monster directly into your open Hero Labs portfolio! This means you can start the game with your Heroes loaded and as you read through the module and encounter monsters, you just click the link from within the monster, set how many of those monsters are in the combat and BOOM. Your encounter manager now has a list of everyone involved in the combat. Rolls initiative and your straight into the fight! 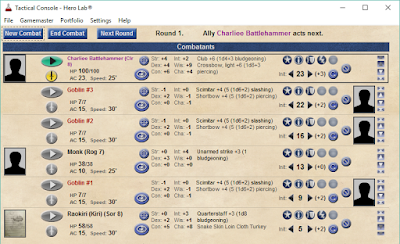 As I said above... i love process which means I love flowcharts that neatly present the flow of information. This is where the Realm Works Sotryboard option becomes useful. You can create the flow charts from directly within the tool! However it's better than that, you can link other aticles to the Plot Points. With the story board built you can now split your screen to see the flowchart on the left and the linked articles on the right. If the case of pre-written modules this lets you quickly and efficiently move from article to article while also allowing you to weave the web of relationships.

You may have noticed the green and blue circles on the articles. This is the 'visible to player' indicator. It is possible for player's to purchase their own player version of Realm Works enabling them to access content that you have marked as visible to them. I personally don't have player's using this feature but i imagine it could be quite useful in large campaigns.

What i am using is the player view option that is controlled via the DM. This opens a window on a second screen that is intended to be run on a second monitor and displayed to the party. A quick and shonky upgrade to my room means I now have a monitor hanging above the table facing the players.

The worst part about Realm Works is having to manually enter all the data in. However that appears to be a short term problem as Lone Wolf are preparing to launch a content market for the tool. This will enable you to purchase modules for the tool that are pre-populated. Imagine being able to buy the core books and the latest module on here in stead of the physical book and having everything linked and easy to find. Yes please!

Overall I have been incredibly impressed with both tools. Yes I have had to evolve the way i play from books into a digital standard but the benefits are huge. I'm sure there are people out there that will never want to use a laptop to run a game. But for the rest of us, this is a significant improvement and a great option.

I highly suggest you check it out!

And if Lone Wolf ever read this... Here's my wish list for future improvements :)