For a long time now I have being fighting an internal war.. I have alot of terrain, it's all modular and I can make alot of different environments out of it. It's also very functional. My buildings are all open top so that my players can interact inside. But ultimately, when I made a village, it didn't look like a village. It didn't have the right atmosphere.

This is what is looks like when I setup a village scene using my current design. 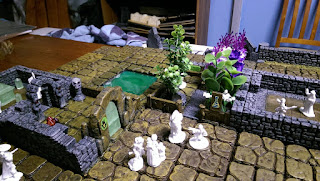 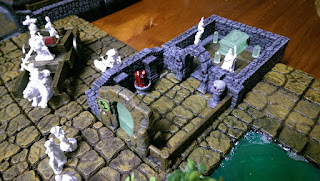 So while this didn't give the town look and feel it allowed for great game play. Buildings were represented, my players could interact with them. Deep down though I knew it was only a matter of time before work began on a real village. Something you would look at and go wow.

So I bought the following molds:

Now my terrain largely works on a 5x5 grid. So ultimately I wanted to ensure the buildings adhered to the same system. The smallest building would be on a 5x5 base and increment in units of 5 from there (10x5, 10x10, etc).

Following along with the tutorial provided over at the Hirst Arts website. '


<Insert Pic Here>
I purchased some double-sided tape and used that to stick all the wood pieces to so that I could efficiently paint it. They were spray painted black and then dry brushed brown.