Adding A Projector To The Table

I recently moved from playing a homebrew campaign over to planning Prices of the Apocalypse. This presented a real challenge for me. The module contains numerous very large dungeons. Many of which have very unique designs that I wouldn't be able to replicate with my current module dungeon setup. I could of course build each dungeon. But the number of dungeons required and time the players are expected to spend in each dungeon means our game would take years.

I therefore started investigating alternatives for getting the digital maps represented on the table.

Obviously printing was my first thought. It's a viable solution and something that I have done previously. Simply print the map off and play on that. But ink gets expensive and printing a new map every session gets tiresome. Storage of those maps becomes a pain.

So I started looking into a VTT solution.

I've seen some great projects online where people have built tables and built TV's into them. I really wanted a BIG solution though and big TVs are expensive.

So I started looking at projectors. I picked up a second hand one from an office sale and have managed to get a "workable" solution. I'm far from happy yet but it is playable. 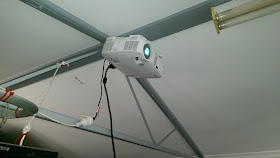 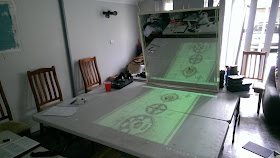 As such I stole a mirror from the missus and developed the overly dangerous configuration you see above. This resulted in a much more acceptable output. With this I have displayed some usable images to the tables. 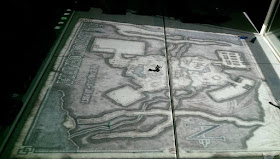 The outstanding problem is the shadows thrown by models on the tables. I really need to find a way to direct the image from above the table instead of the side. We have plans to try out the head of an overhead projector to see if that can increase the size of the image while also directing the output from directly above the table.

Here's some more examples of the current output. The possibilities are exciting. 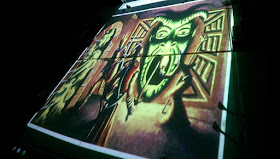 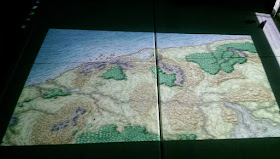 Eventually I plan on using Realm Works to control the pictures which will give me the ability to restrict Line of Sight for specific parts of the map. 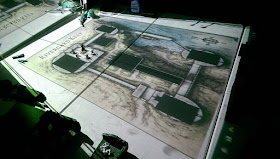